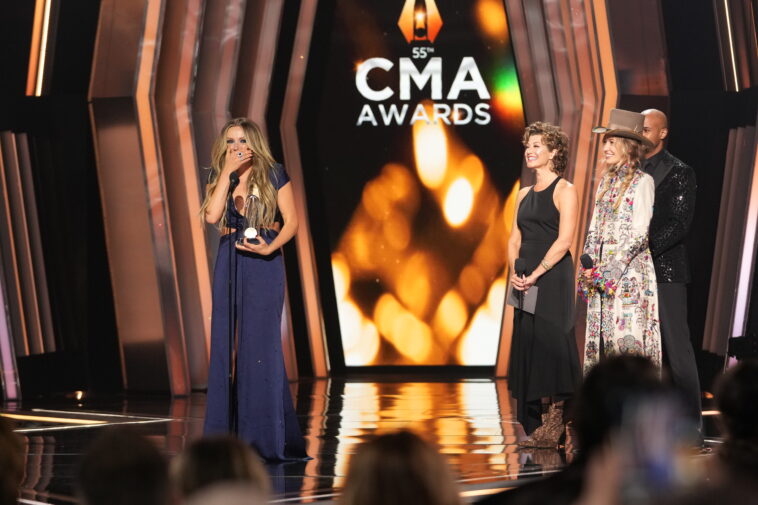 Carly Pearce accepts the Female Vocalist of the Year Award at “The 55th Annual CMA Awards,” on Wednesday, November 10, 2021; live on ABC from Bridgestone Arena in Downtown Nashville.

The 55th Annual CMA Awards were a night of incredible performances, stunning outfits and most of all memorable moments — including Carly Pearce taking home her very first win for “Female Vocalist of the Year.”

The coveted country music award is an honor like no other, and a well-deserved one to be placed in Pearce’s hands. Fans of the Kentucky-born artist got to watch what may have been one of the sweetest moments in country music when she learned of her win.

When Pearce’s name was called, she took to the stage before falling to her knees with joy. With a little help from good friend Ashley McBryde, Pearce then delivered her acceptance through tears of joy and love.

“I really didn’t think this was gonna happen,” started Pearce before calling McBryde to the stage for help.

“What she meant to say was,” McBryde said with a laugh as she joined Pearce on stage. “There’s a lot of love, respect and admiration in this category.”

Reflecting on the “crazy year” she’s had, which fans know has included a Grand Ole Opry induction, the release of both 29 and 29: Written in Stone and now her first CMA Awards win, Carly chatted with Celeb Secrets after her epic evening.

When asked what she would say to herself one year ago, the woman of the hour explained that she would tell herself then to “hold on, sister.” Check out the full interview at the bottom of the page to see the raw and reflective moment unfold!

“I would tell her that I know she’s sad and that she’s struggling, but she’s going to have such an amazing redemption story,” the singer told Celeb Secrets. “So, hold on, sister! This is about to blow your mind.”

And blow her mind it did! According to a press release, the night was a long time dream come true for Pearce.

“And you have to know and understand how badly I wanted to win Female Vocalist of the Year as a little girl,” Pearce said. “I would watch the CMA Awards, see all the women who’d come before and dream one day I might be up there, too. But when it happens? When you’re in the moment? Nothing can prepare you for that, and it’s even more powerful, more exciting than anything I’ve ever felt in my life.”

With the masterful music of 29 and 29: Written in Stone fueled by loss and grief, the country star is now experiencing anything but! Looking to the future, Pearce will be taking more stages in the coming months. According to the release, Pearce resumes The 29 Tour Nov. 18 in New York City as well as joining Kenny Chesney on his Here and Now 2022 Stadium Tour. Fans can check out tickets for both of these can’t-miss concert series here.

What did you think of Carly Pearce’s Female Vocalist of the Year win? Let us know by leaving a reaction below or sending us a tweet @CS_Country. 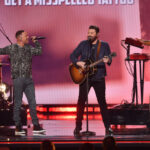 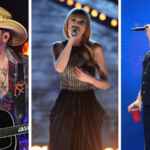