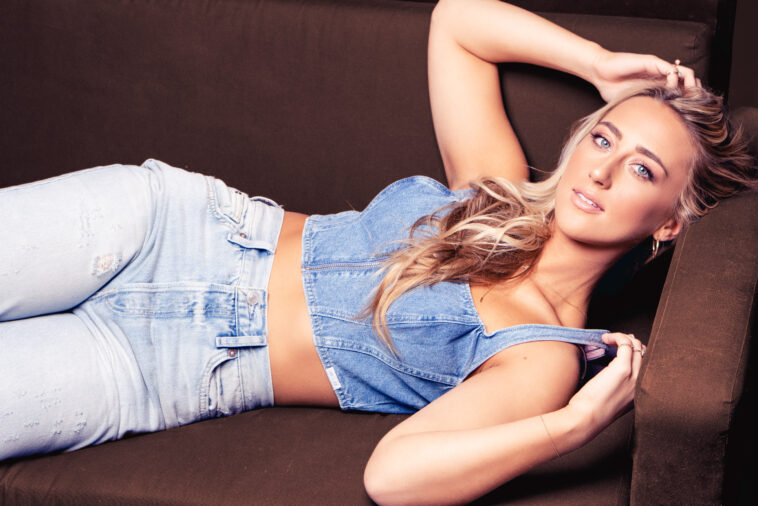 Country music newcomer Ashley Cooke is the dose of positivity and sunshine we need right about now in the world. The dynamic singer and songwriter is known for her honest and raw storytelling, which she developed and discovered while falling in love with country icons such as Rascal Flatts, Jason Aldean, and Florida Georgia Line.

She was only 18-years-old when she packed up and moved to Nashville to follow her passion for music. However, it wasn’t until she dominated the Country Showcase at Belmont University when she realized the musical path she was going down, was indeed for her. After receiving the title, she quickly found herself in an elite class of winners that includes big names like Brad Paisley, Chris Young, and even Tyler Hubbard.

Following graduation, the artist continued to make waves in Music City with award-winning producers and writers. While Cooke loves to pen her own lyrics, she quickly learned the importance of utilizing the outstanding resources on music row.

“I believe the best song wins and that’s a huge thing in Nashville. I think everybody should kind of encompass because there are so many talented people in this town and a lot of them are just songwriters and want to get their songs cut,” says Cooke in an exclusive interview with Celeb Secrets Country. “If you really resonate with a song, it doesn’t matter if you wrote it or not, music is music and it needs to be out when it needs to be out and the right person will find it.”

With that being said, her recently released track “Sunday Morning Kinda Saturday Night” fell in her lap, thanks to Craig Wiseman and Matt Roy. The lyrics behind the mid-tempo single imminently spoke to Cooke, which left her no choice other to record the window-down type of song.

The brand-new single, released on Tuesday, March 2, has scored No.1 on the iTunes Country Chart and No. 15 on the iTunes all-genre charts. As the track rapidly climbs the music charts, the vocalists hopes her fans will relate to the lyrics. She also would like to see this heartfelt track on their Sunday morning playlist after a crazy or emotional Saturday night.

“This song takes back to the days in South Florida when I’d drive windows down in my Jeep, blasting country, chasing a sunset down by the water,” says Cooke. “My Soundtrack to those drives helped me through breakups, big changes, and growing up and I hope this song gets to be the soundtrack to someone else’s Sunday morning kinda Saturday night when they need it,” she adds.

With that being said, Celeb Secrets Country sat down (virtually) with Ashley to talk about her new hit “Sunday Morning Kinda Saturday Night,” how she got into country music and the vision behind “The 615 House” in Nashville. Learn more about Ashley Cooke by reading our full Q&A below.

Let us know what you think of her hot track “Sunday Morning Kinda Saturday Night” by leaving a reaction at the bottom of the post or by sending us a tweet at @CS_Country.

Celeb Secrets Country: Who is Ashley Cooke? Could you tell us about yourself?

Ashley Cooke: “I’ve been in music since I was like 11-years-old. I moved around the country a ton, growing up I hit like every time zone. I was born in Wisconsin, moved to California and Florida, and then to Nashville. At 7-years-old, I moved to LA and quickly found myself surrounded by entertainment. So, I grew up pretty much-playing shows around the country and coming to Nashville to write my songs on music row and recording. Then I officially moved to Nashville when I was 18, I went to Belmont University.

I studied communications and nothing to do with music and then my senior year, I applied kind of on a whim for this thing called the “Country Showcase.” It’s basically a time for seniors to be shown if they want to be in music. They have a pop showcase, a country showcase, a rock showcase, It’s just all genres. Previous winners of the country showcase are like Florida Georgia Line and Brad Paisley. So I applied on a whim having no clue if I was going to get in, I got in, and I won the showcase. My career was jump-started at that point, because  I was like, ‘all right, this is what I’m going to do then.’ I was focusing on my career in Nashville, writing songs and playing shows and then COVID hit. So, I was down in Florida quarantining and got on TikTok kind of as a joke, to be honest. I just got into the videos just for fun, and they took off.”

Celeb Secrets Country: What got you into country music?

Ashley Cooke: “It’s a great question because I was just into music when I was a kid, I just loved all kinds of music. I started writing songs when I was like 10 or 11-years-old and I noticed that it was so based around storytelling and that’s so central to country music. So, I just kind of fell into it, and then when I went to high school in South Florida, the entire culture was just trucks, Jeeps, bonfires, tailgates, and you know, windows-down kind of music.”

Ashley Cooke: “I write across the board, but the music that I’m creating and loving and releasing right now is just windows down country. It just feels good. It was almost reminiscent.”

CSC: You just dropped your hot new single “Sunday Morning Kinda Saturday Night,” how are you feeling, and could you tell us about this track?

AC: “Releasing music into the world is like standing naked in front of the world, I feel like you’re saying ‘here’s my art, here’s what I’ve created for you to decide if you like or not.’ But, I cannot think of a better song to really go out with for this next project. When I first heard it, so I’ve been writing my entire life and I’ve never got an outside song, meaning I didn’t write the song for the first time. I was like, ‘I could have written this and this is my story to a T.’

So I’m so excited for it, and I just really hope everybody gets the same vibe from it, the song feels like you can roll your windows down and have a good time.”

AC: “I believe the best song wins and that’s a huge thing in Nashville. I think everybody should kind of encompass because there are so many talented people in this town and a lot of them are just songwriters and want to get their songs cut. If you really resonate with a song, it doesn’t matter if you wrote it or not, music is music and it needs to be out when it needs to be out and the right person will find it. So I found this one, and I truly believe that it was meant for me.”

Craig Wiseman and Matt Roy, are phenomenal writers. They’re both number one writers and you know, good friends of mine. They’re incredible.”

CSC: Could we expect a music video from you anytime soon for this single?

AC: “I would really love to shoot a music video somewhere down in Florida where I’m from, where this song reminds me of. I mean, it depends on how well people like it.”

AC: “So, The 615 House is my baby. I created it with my friend, Chris Ruediger about five, six months ago And it’s already grown to have 600,000 followers on TikTok It’s crazy. This past week, two of our members hit number one on iTunes. It’s just basically a collaborative house for young artists in Nashville who are grinding towards the music thing and they all get together and collaborate. It’s also people that have big followings on social media. It’s truly just a place for everybody to completely throw the competitiveness out the door, get together and just make videos and allow their fan base to get to know who they are in a fun friend setting.”

AC: “I think it’s just allowed me to creatively open my mind, you know, meeting so many different people through this app. I only knew a couple of people in the house before TikTok. I met so many of the people in the house through TikTok and collaborating with them through the app. So, I think it just continues to help me grow and learn about social media too. Thomas Mack has taught me about hashtags and like we all grow so much together in regards to social media, which is a huge part of the music industry right now.”

CSC: Do you think TikTok is the platform for musicians right now?

AC: “I will say TikTok has allowed me to get in front of so many people that I don’t know if the algorithm of Instagram would have allowed me to. Instagram is a phenomenal app, you know, I use it daily, just like TikTok the way that the “for you page” works, you get to interact with so many new people every time you post something. So, I think for musicians not to be on TikTok really isn’t the smartest move because I feel like it’s just another way to interact with fans and the fans are the reason why we can do this in the first place.” 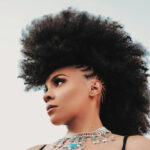 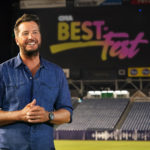