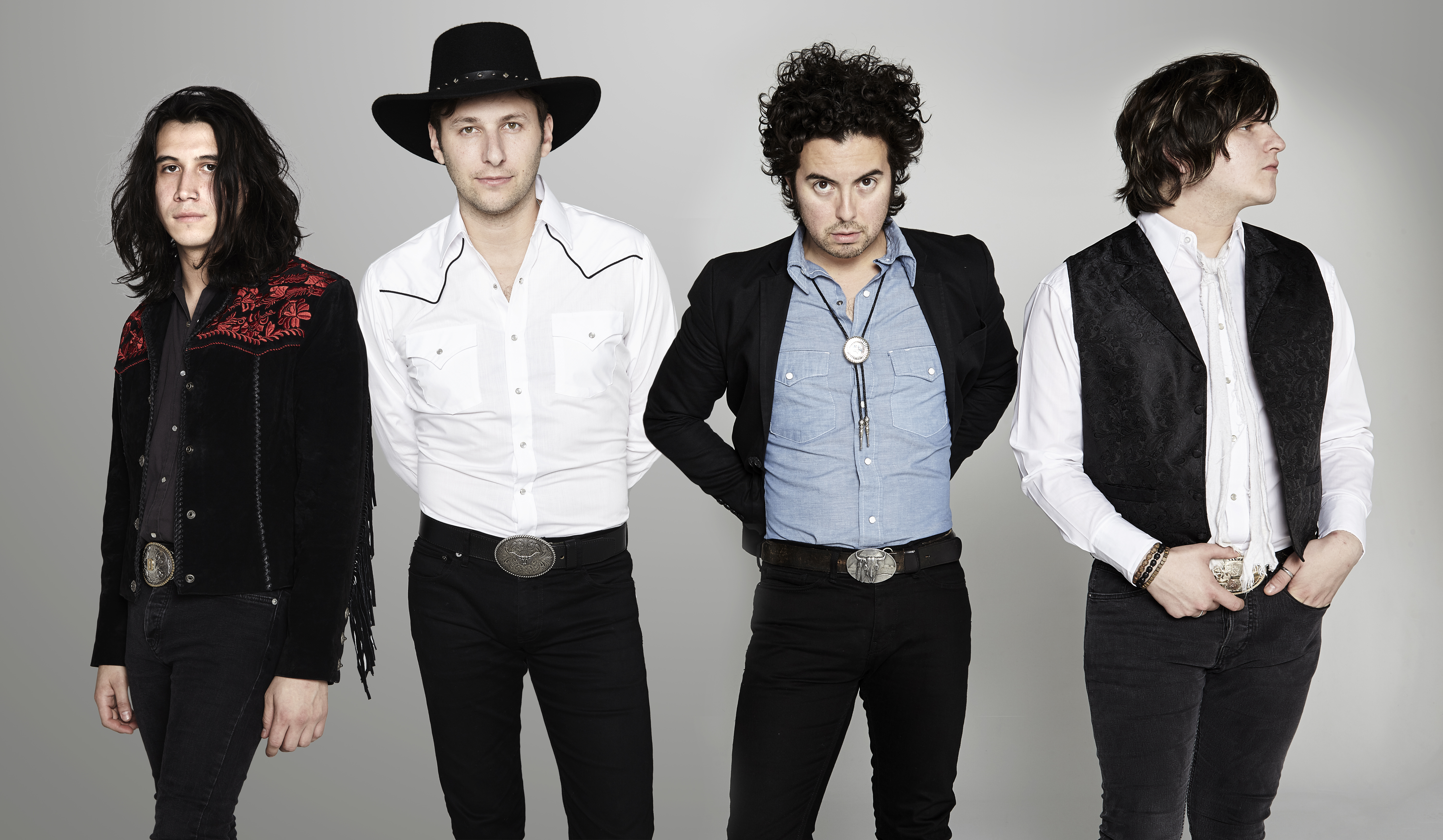 “Jerry moved from San Antonio to New York a few years ago, where he met me,” Derek James said. “We all had our own bands and were all songwriters and individual artists. We became friends through music connections and two and a half years ago we all got in a room together to experiment songwriting together. Big grins and excitement ensued, and that was the birth of The Last Bandoleros!”

Fuentes and James began collaborating in Brooklyn.  But, Fuentes kept being drawn back to his native Texas to record in the same San Antonio studio where a couple of talented brothers were also emerging.  Diego and Emilio Navaira, sons of Tejano music legend, Emilio Navaira, Sr., had been making a name for themselves around town for their energetic live performances and sterling vocal chops.

“When I moved to New York, I had not met these guys. I would come back to San Antonio and work in a studio that I grew up in. The producer who worked in the studio introduced me to Diego and Emilio. I went back to New York and went to Derek saying we had to write with them,” Jery Fuentes told us.

After writing and recording, the band began to play live shows, opening for The Mavericks, Jon Pardi, Josh Abbott Band, Los Lonely Boys and Marc Broussard. Recognizing their high level of musicianship, Sting called upon them to sing backing vocals on his “I Can’t Stop Thinking About You” single which soared the heights of radio charts around the world.

The band recently released their self-titled EP, which features a blend of Tex-Mex, country and rock n’ roll. The Last Bandoleros combine their unique cultural experiences with rare musical camaraderie and, as audiences will continue to discover, their exuberance and joy are contagious.

Celeb Secrets Country recently sat down with The Last Bandoleros in Nashville for a hilarious interview! The band were some of the funniest people that we have interviewed thus far. There was a fantastic group dynamic between all of the band members and they were open and easy to talk to.

Check out the full Q&A below and keep up with The Last Bandoleros by following them on Twitter at @lastbandoleros. The band will be touring with Sting across North America beginning this February, with tour dates and ticket links here.

Celeb Secrets Country: You recently released your EP, do you have a favorite song that you like to perform off of it?

Jerry: “You know, its hard to say. I like playing all of them. Sometimes I like to play the “I Don’t Want To Know” kind of thing, or I like rocking out too. It rotates, we change our set a lot. For me, its too hard to say, I just love playing live.”

Emilio: “I’m really happy with a hot nice number called “Maria.” I like that a lot.”

Derek: “I think our favorites are the ones that haven’t been released yet.”

Celeb Secrets Country: How would you describe the sound of the EP for those who haven’t heard it yet?

Jerry: “Earlier, Derek was talking about this with food analogies. So we used guacamole as an example. Its tex-mex, its rock and roll, its Beatles, its pop, its Americana. We threw it all in to guacamole with pico de gallo and mixed it all up.”

Celeb Secrets Country: What is the most embarrassing thing that has happened to you on stage?

Jerry: “Oh that’s easy. Well for me, I had to get some new boots recently because I had these boots that didn’t have rubber grip on the bottom. It happened back to back, I’d be rocking out and then its just one of those things where I started to head back to the microphone and whoosh, I’m on my back. And once I’m on my back I have to keep going, there was a vocal part coming so I had to get up. So this happened one time in Houston, then we fly to Nashville two days later to play at CMA Fest, it happens again. Same song. This time I fall on my back and I catch Diego’s eye and Diego is giving me a look like ‘Are you serious? Again?’”

Emilio: “I couldn’t even play because I was laughing. I had the best view in the house, I was literally looking over him and I just couldn’t believe that it was happening again, it was crazy!”

Diego: “I actually got sad the next show that it didn’t happen. I missed it.”

Jerry: “Diego also has a good one where we weren’t playing on stage, but we were brought on stage by The Mavericks for their finale. Diego had a few drinks and decided to get the cow bell. He full on Will Ferrell-ed this thing.”

Diego: “I was on stage with The Mavericks!”

Jerry: “What took the cake was when he decided to stage jump…and no one caught him! The next morning he was like, ‘why does my elbow hurt?'”

Celeb Secrets Country: What is the most awkward fan experience you have encountered?

Diego: “Anyone who takes the time to listen to us and becomes a fan of our music, we love them.”

Jerry: “But you do have those super-fans when it’s a little bit awkward.”

Derek: “We appreciate everyone who approaches us, it is amazing. We are grateful of everyone who supports our music, but yes, some of those experiences can be interesting.”

Emilio: “I just remembered when we were in Akron and Derek was so nice because it was some lady’s birthday. It was an older lady and she was like ‘I have never seen the inside of a tour bus before.’”

Derek: “Okay, so we were on our first tour bus tour.”

Diego: “You know, we stayed after and talked to people. So after, we head back to the bus and I’m changing. I’m putting on my comfy clothes.”

Derek: “And I’m walking on my way to the bus and I get stopped by these two older ladies.”

Jerry: “They came by earlier and we signed autographs for them, they were big fans of the show.”

Derek: “So one of them said that she had never been on a tour bus and it was her 60th birthday. I didn’t know they wanted to move in to the tour bus.”

Jerry: “Diego was half naked and I was getting ready to take off my shirt, and we see Derek walk in to the bus with these two older women. You could see it in their eyes that they were thrilled to be on the bus. We knew it was going to take about 30 minutes to get them off.”

Derek: “But they were so sweet! We want to give that experience occasionally.”

Diego: “It was sweet, but it was just an awkward situation.”

Celeb Secrets Country: Who are your celebrity crushes?

Derek: “I met one of mine two nights ago! We played a show with KT Tunstall and I’ve got a crush on her.”

Jerry: “Oh, that’s why you were so excited!”

Derek: :She’s amazing, I love her music as well.”

Jerry: ” would probably say, Maren Morris. I like her record, she is also cute too. Actress-wise though, Zooey Deschanel.”

Celeb Secrets Country: What is your favorite type of music other than your own?

Diego: “I would have to say punk rock.”

Celeb Secrets Country: Who was your favorite artist or band as a kid?

Diego: Van Halen. I started playing guitar when I was 8 or 9, so once I got in to Van Halen I just learned those records on the guitar.

Jerry: “New Kids On The Block.”

Celeb Secrets Country: What is your favorite part about being on the road?

Emilio: “Definitely my favorite part about traveling is playing. I’m not always geared up to get on a plane or be in a hotel room, so all that stuff that leads up to it during the day, those minutes on stage make it all worth it and make it fun for me.”

Derek: “We’re still developing new ways to pass time and have fun on the road, like developing a new language.”

Diego: “Me and Derek get competitive with the NBA game on Xbox.”

Derek: “The best part about traveling with Jerry is that he always finds the coolest and most delicious restaurants or bar in every city.”

Diego: “It’s a blessing and a curse. It can take us an hour to eat rather than ten minutes in and out.”

Emilio: “He’ll also order for you.”

@lastbandoleros: Our EP is available on iTunes, let us know what your favorite song is! 📸@jessicarouse (Link in profile)

Celeb Secrets Country: What are your drinks of choice?

Emilio: “Jack Daniels. I like 7 UP in it sometimes too.”

Derek: “Usually I’ll do Jameson on the rocks, but if I’m in a comfortable environment with people that I feel cool with, then I’ll go with my real favorite, piña colada. Anything with an umbrella in it.”

Diego: “I’m Jack Daniels with anything.”

Celeb Secrets Country: If you could collaborate with any artist, who would it be?

Diego: “That’s an interesting person because the one person that I would pick, we already have. Sting.”

Derek: “It still feels like a dream to say it out loud.”

Emilio: “I grew up on The Police. The craziest thing that happened was our manager, Martin, sent us a picture of Sting writing out our lyrics and learning our songs. It was so weird for me. I remember learning The Police songs in my room, and here is Sting learning our songs, it freaked me out, it was so cool!”

Happy Birthday Sting! Thank you for your music, for letting us jam with you, and for being such an inspiration! #HAPPYBIRTHDAY #Sting

Celeb Secrets Country: Where is your favorite spot in Nashville to hang out?

All at once: “Red Door Saloon.”

Jerry: “Mine is Biscuit Love.”

Diego: “This isn’t really a secret because I let it be known wherever I am. If I’m at a restaurant and I finish, I need my plate out of my face immediately. Someone needs to come and pick it up right away. I’m not proud of it.”

Derek: “I’ve got an orange Tic-Tac addiction. I can’t not eat all of them. I’m trying to avoid them. As a kid I used to buy the 5-packs and I’d finish them within an hour. Jerry is a coffee snob.”

Jerry: “I’m not a snob. I don’t like bad coffee. It doesn’t have to be from a certain region, it just has to be good coffee. I think Emilio’s fun fact is that if we were to spend another hour with you, he would pick up whatever unique thing about you, he is a master imitator.”

Emilio: “I’ve gotten everyone in Warner’s office all down.”

Jerry: “He will figure out whatever personality quirk you have, whether its good or bad or whatever, he will magnify it and make a cartoon out of it. It is crazy and uncanny.”

Derek: “He will bring it to your attention and you will never forget it whenever you see that person.” 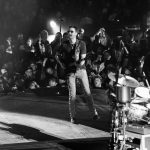 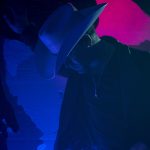