Tip your cowboy hat if you are ready for the biggest night in country music! Turn on your go-to country artist and crank up the volume because the 2021 CMA Awards is just hours away and Celeb Secrets Country is here to prepare you for the star-studded affair.

The honky tonk ceremony will return back to the legendary Bridgestone Arena In Nashville, Tennessee – where multi-platinum artist, Luke Bryan will start the party as host. “Being asked to host the CMA Awards was definitely something I put a lot of thought into before answering,” shared the American Idol judge in a recent press release. “The pressure that comes along with that can be overwhelming, but knowing I get to help honor and celebrate so many of my friends it was something I couldn’t turn down.”

Bryan follows the queen of country music, Reba McEntire and Darius Rucker –  as they both joined forces in 2020 to co-host the music-filled evening in the midst of the global pandemic. Throughout the high energy evening, the two did a wonderful job of keeping the audience engaged by feeding off of one another. However, this time around – Bryan will be tacking the prestigious job by himself, as he is the first artist to take on hosting duties solo in 18 years.

So, whether you are tuning in to see who earns each title, for the cutting-edge talent, the country-inspired fashion, to hear from awesome nominees, or to witness Luke Bryan dominate as host, we got you covered!

GIVE us a follow on Twitter at @CS_Country and IG at @CS_Country, as we’ll be live-tweeting and Instagramming the best moments from the eventful night!

What are the Country Music Awards?

It was the late 90s’ when the Country Music Association had the idea to honor the individuals who have dedicated their livelihood to the beautiful genre of country. The first CMA Awards Banquet and show was held in 1967 and aired live the following year on NBC. Ever since then, the star-studded show has become the longest running, annual music awards program on network television. However, it wasn’t until 2006 when the CMA’s was broadcasted on ABC for the very  first time.

How can I watch the CMA’s?

Pour yourself a glass of whiskey and get ready to be glued to your television screens, because the CMA’s will air LIVE on Wednesday, November 10 at 8 p.m. ET and 7 p.m. CT on ABC. Music goers who don’t have cable, have the opportunity to stream the ceremony on the ABC App, FuboTV and Hulu + Live TV. Both streaming platforms offer free trials and have the capability to stream from any laptop, phone or even TV!

Leading up to the glamorous event, ABC will be airing CMA-inspired programming. For instance, on Nov. 7 and 8 – individuals tuning in can enjoy “On the Red Carpet: Countdown to the CMA Awards,” which is jammed-packed with exclusive interviews with nominees Ryan Hurd, Lainey Wilson, and Michael Ray. On Nov.8 ABC will drop their “Backstage Pass: Countdown to the CMA Awards” segment, where fans can hear from Luke Bryan, Carly Pearce, and Keith Urban.

We spent one week getting up close and personal with some of country’s biggest names, including @lukebryan, @ladya and @JimmieAllen, ahead of the #CMAawards!

The man behind the summertime chart-topping anthem “One Margarita” will be hosting the biggest night in country music. Luke Bryan will be inviting his fellow country music friends up on stage at the Bridgestone Arena In Nashville and will be making his hosting debut. The two-time CMA Entertainer will be joining the ranks of iconic show hosts including Reba McEntire, Carrie Underwood, Brad Paisley, Dolly Parton, Randy Travis, Brooks & Dunn, Glen Campbell, Johnny Cash, Charlie Pride, Kenny Rodgers, Willie Nelson and more.

“I mean, growing up in Georgia, I remember watching Vince Gill, Reba, Brooks & Dunn, Kenny Rodgers, Barbara Mandrell, to name a few,” he shared in a statement about watching icons host the CMA’s back in the day. “I am honored to have my name included in this group. I’m looking forward to making it fun and memorable and using this platform to continue to make country music shine,” he concluded.

Kick on your dancing shoes, country fans because Nashville will be moving and grooving tonight with outstanding performances. Fans could expect to see Eric Church, Mickey Guyton, Dan + Shay, Brothers Osborne, Miranda Lambert, Luke Combs, Chris Stapleton, Jimmie Allen, Blake Shelton, Gabby Barrett, Zac Brown Band, Keith Urban, and Thomas Rhett to dominate the stage. However, several of our favorite stars are rubbing elbows to help put on a groundbreaking show – Carly Pearce and Ashley McBryde will sing “Never Wanted to Be That Girl,” Jason Aldean will team up with Carrie Underwood will share “If I Didn’t Love You” for the very first time on TV, Chris Young and Kane Brown will perform their smash hit “Famous Friends,” and Dierks Bentley will call in his good pals Breland and Hardy to deliver “Beers on Me.”

AND THE AWARD GOES TO…#CMAawards PRESENTERS have been announced! Country Music's Biggest Night will welcome some familiar faces & new friends to the stage THIS WEDNESDAY at 8/7c on @ABCNetwork! See the full list here: https://t.co/8eSOcsvwRx✨ pic.twitter.com/2jqHR7TpmP

Entering the night with the most nominations are Eric Church and Chris Stapleton with five nominations. Although, our girl Gabby Barrett is closely trailing behind with four noms for her empowering anthems “I hope” and “The Good Ones.” Brothers Osborne, Kane Brown, Luke Combs, Miranda Lambert, Ashley McBryde, Maren Morris, and Chris Young will also be rolling into the night with three. 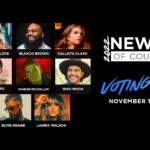 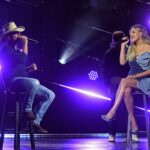